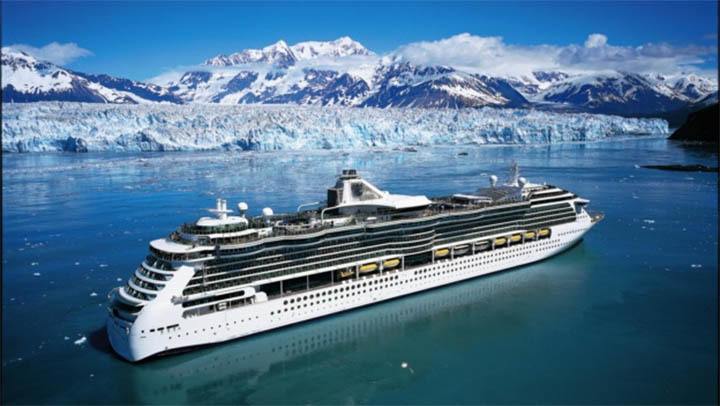 For as long as I can remember I have wanted to visit Alaska. I have looked forward to seeing whales, monster glaciers and the quaint little fishing villages on the inland waterways. But as you probably well know, raising four sons in the mid 1960’s up until the early 1980’s tends to put a damper on a lot of things you can afford to do—and a cruise to Alaska is one of them.

However, after the youngest left the warmth of home-sweet-home, several trips that had been long postponed were now possible. Now the trick was to get my dear sweet wife as enthused about a cruise to Alaska as I was. From the word go all I heard was “No way do I want to go to Alaska. No way do I want to pay good money to get on a boat and freeze my rear end. If you want to go to Alaska go ahead, I’ll go to the Caribbean with my girlfriends.” So much for my fantastic trip to whale and caribou country. I might have even panned for gold and if I hit the motherlode I wouldn’t even tell her. But, that’s not the end of the story. Au contraire my good people. Life has a way of producing some surprising turnarounds. Read on.

It was just a year or so ago when I got a brochure in the mail from Holland America Cruise Line inviting us to join them on a seven day cruise to Alaska, at a great price. I knew my wife’s feelings about such a trip—at any price—so I proceeded to fill out the booking form for one senior citizen—me. As I was completing the cruise details my wife stuck her head in the door. She asked what I was doing.

“I’m filling out my reservations on my round trip seven day cruise to Alaska.”

In a somewhat surprised response she said, “You aren’t going without me, I’ve always wanted to go on the inland waterway cruise to Alaska. Make the reservations for the both of us and besides, this can be our fifty-eighth wedding anniversary celebration. We’ll have a ball. “

I should interject at this point that my sweetheart had been diagnosed with Alzheimer’s disease and things were not looking real good. This would probably be our last major trip together and I was glad the plans had turned out the way they did. “We’ll have a ball.”

I made the reservations for two and prepaid the entire fare. All was set, we were going to Alaska the first week in September. As the time drew closer her condition went downhill fast. She could not do the normal everyday functions. Just two weeks before our departure it was obvious that I would have to cancel the trip. It was with a heavy heart that I called and cancelled. Disappointment and sadness– not at calling off the trip but sadness at the realization that my darling wasn’t going to last much longer. Our four sons were called and all four arrived in time to tell mom how much they loved her. All of us were at her bedside to say goodbye as she went to meet the Lord.

Now, the end of the story. I have sold our house, given the dog to a loving family with two small boys, and moved into a beautiful condo. Okay—ready for this? In late May I’m going alone on a cruise to Alaska. I’ll even pack an extra sweatshirt.